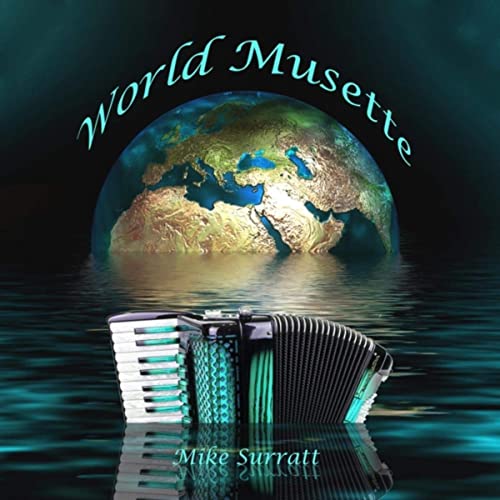 Mike Surratt’s mother emigrated from Germany to the United States after WWII and always wanted someone in the family to learn to play the accordion. He was the ‘lucky one’.

Growing up in Maryland, Mike started taking lessons at the age of 11. Three years later fortune smiled on him as he got his first booking, and it wasn’t long before he started his own band in 1972. That band, The Continentals, still preforms today. (www.polkasarecool.com)

In 2005 he founded his own record company: Eclectic Coalition Records. Through ECR, he has released several CDs that span many genres, (New Age, Swing, Rock, Polka), but the accordion is still the heart and soul of the label.

Refusing to be tied down, Surratt has again expanded his horizons, this time it’s into landscape of World Music.

2020 brings the release of ‘World Musette’.
“I made World Musette because I truly believe that the accordion is the world’s musical instrument and should have been sent up with the Voyager Spacecraft.”
Indeed, so many countries’ traditional folk music feature some kind of accordion. If it’s not a piano-accordion, then it’s one of the many variations that still gets “air through reeds” (harmonium, concertina, bandion, etc).