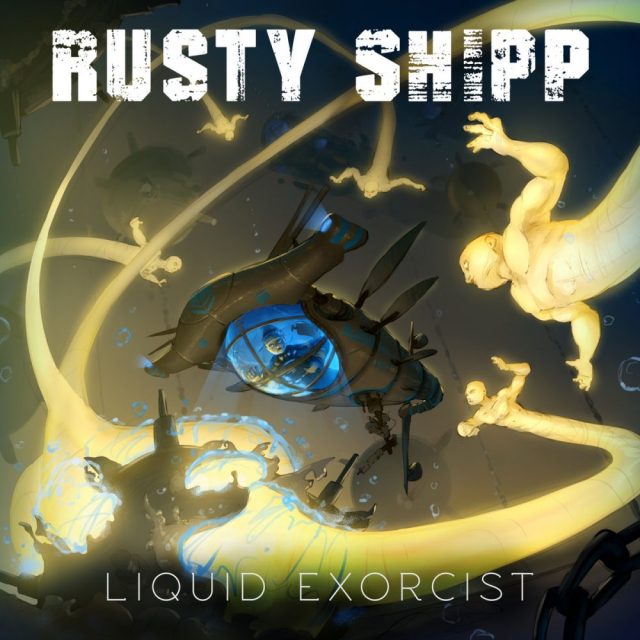 “In an age where people fear the death of rock music, Rusty Shipp is on a mission to make the most creative and catchy music since The Beatles by meticulously engineering melodies and lyrics that will fill people with excitement and wonder, breathing new lifew into the legacy of Rock.”

“Rusty Shipp sounds like Nirvana trying to play a Beach Boys song right after hearing Dark Side of the Moon.”

One of my favorites of the many artists and bands I’ve featured on this blog is Nashville four-piece Rusty Shipp. (You can read my reviews by clicking on the links under “Related” at the bottom of this page.) The brain child of front man Russ T. Shipp (his honest to God real birth name), Rusty Shipp is a self-described “Nautical Rock’n’Roll” band, with a sound influenced by ‘the melodic chord progressions of The Beatles, the surf guitar of Dick Dale, the grunge rock of Nirvana, and the heavy metal of Led Zeppelin’, among others. Their music is characterized by a dark, immersive sound, high-octane riffs and haunting vocals. Like many bands, they’ve experienced changes in lineup since forming in 2014, and now consist of the aforementioned Russ T. Shipp on guitar and vocals, Elijah Apperson on lead guitar, AJ Newton on drums and Andrew “Speedy” Speed on bass. Together, they’re an immensely talented group of musicians who truly know how to deliver the hard rock goods.

Following up on their phenomenal and highly-acclaimed 2017 album Mortal Ghost, Rusty Shipp has put out a new album Liquid Exorcist, which dropped on November 7th. In keeping with their nautical theme, it’s a concept work built around the subject of sea mine terrorism. It also plays somewhat like a rock opera, with one song seamlessly transitioning into the next without skipping a beat. Liquid Exorcist has a relatively short run time of only 26 minutes, exactly half that of Mortal Ghost, as several of the tracks are transitional or connectors between longer tracks. Nevertheless, it still makes an incredibly powerful statement and packs quite a wallop in it’s relatively short run time. Also, whereas Mortal Ghost has a heavier grunge feel, Liquid Exorcist sounds more melodic, sweeping and epic. The first time I listened to it all the way through, I was blown away.

It opens with the 42-second-long “Mine Factory“, an ominous-sounding instrumental intro that builds into a frantic barrage of gnarly riffs and smashing drumbeats as it immediately segues into “Liquid Pendulum“, a fantastic song with blistering guitars and intense, hard-driving rhythms that ebb and flow like waves on a stormy sea. Apperson and Shipp’s intricate guitar work is terrific, and Newton’s power drums provide just the right amount of propulsive thrust. Shipp has a beautiful singing voice that registers in the mid-range, occasionally rising to a just shy of a falsetto. The biting lyrics are a denunciation of the terrible legacy of countries filling the oceans with explosive mines: “Aren’t your wars waged on land enough? Why don’t you just keep your mankind to yourself? Leave behind your mess for someone else. Sharks will gladly come to your help.”

Rusty Shipp is not a Christian band per se, though Shipp is up-front about his Christian faith, as is evident in lyrics like “Raptured from the shrapnel in the twinkling of an eye. Jesus wasn’t kidding when he said the end was near.” Overall, the lyrics address the dangerous work of those attempting to dismantle sea mines: “Disconnect the wires, before we all expire, but the water is turning into fire now. Everybody down, the bombs have stopped their ticking sound, five seconds till Heaven’s all around.”

“SS Naronic (Reprise)” is a ghostly revisit of the original track featured on Mortal Ghost, chronicling the White Star Line ship lost at sea in the north Atlantic in February 11, 1893, along with all its 74 passengers on board. To echoed, underwater sounds, Shipp’s electronically altered vocals lament “O God, please tell me there is more than this. That this cold abyss is not the end. Tell me it’s more than an accident, a warning to teach a lesson. Show me how it’s all part of the plan.”

Rusty Shipp then pays homage to Audioslave with a well-executed cover of “Show Me How to Live“, doing great justice to the powerful classic.  Once again, there’s a religious reference with the lyric “Nail in my hand from my Creator. You gave me life now show me how to live.”  Though different from Chris Cornell’s, Shipp’s vocals are just as effective in conveying the raw passion expressed in the lyrics. That segues into the face-melting and aptly-titled instrumental interlude “Blow Your Mine“. This intense, minute-long track perfectly showcases the band’s impressive skills.

“Hundred Crosses” is, I think, the most beautiful song on the album, with a dramatic, sweeping melody that switches from calm to exuberant and back again, making for a very exciting listen. The multi-textured guitars are sublime, accompanied by Newton’s snappy drums and wildly crashing cymbals, all working in tandem to create a glorious soundscape for Shipp’s soaring vocals. Next up is “Breaking Waves“, the first single released in advance of the album last July, which I featured on this blog. It has a dark but catchy melody, with layered riffs of gnarly and distorted guitars, throbbing bass and pounding drums. Shipp explained that the song “describes the battle between technology and nature in a tortoise-and-the-hare-like metaphor, where mankind’s mightiest technology won’t stand a chance in the long run against the simple, steady erosion of the ocean’s immortal waves (i.e, nature) breaking it down.”

Liquid Exorcist closes with another religious nod on the nautical poem “Navy Hymn“.  “Eternal Father, strong to save. Whose arm doth bind the restless wave. Who bidd’st the mighty ocean deep. Its own appointed limits keep. O, hear us when we cry to Thee. For those in peril on the sea.” The brief track features stirring a capella choir vocals, accompanied only by sounds of the sea, and it’s a fitting end to the album.

Folks, this is a stunning and masterfully-crafted record on every level. Given it’s relatively brief run time and riveting listening experience, it seems to end far too quickly. That’s a good thing, and certainly preferable to some albums that overstay their welcome with too many filler tracks. Rusty Shipp continue to impress me with their incredible songwriting and musicianship, and deserve to be huge.

In the album, the band constructs an underwater soundscape with tracks weaving in and out of each other to tell the
story of an evil organization that has laced the ocean with a hundred sea mines, making war with their enemies and innocent sea-dwellers alike.

The album title is a reference to the
metaphor of “exorcism,” i.e., the casting out of a spirit from the body, that is a theme
present in every song on the record, reflecting
the different experiences of the souls affected by this marine warfare.

“For this new album we’re really drawing out the ingredients of our staple ‘Nautical Rock ‘n’ Roll’ sound in bold and experimental ways to tell the story of Liquid Exorcist. While progressing the experimental
sounds of this new genre, we’re also
channeling our roots to give homage to our collective influences, such as doing a Chris
Cornell tribute song [‘Show Me How To Live’]
and songs that are an obvious nod to
60’s surf rock, prog rock, and Nirvana-esque grunge pop.”
Russ T. Shipp (frontman)